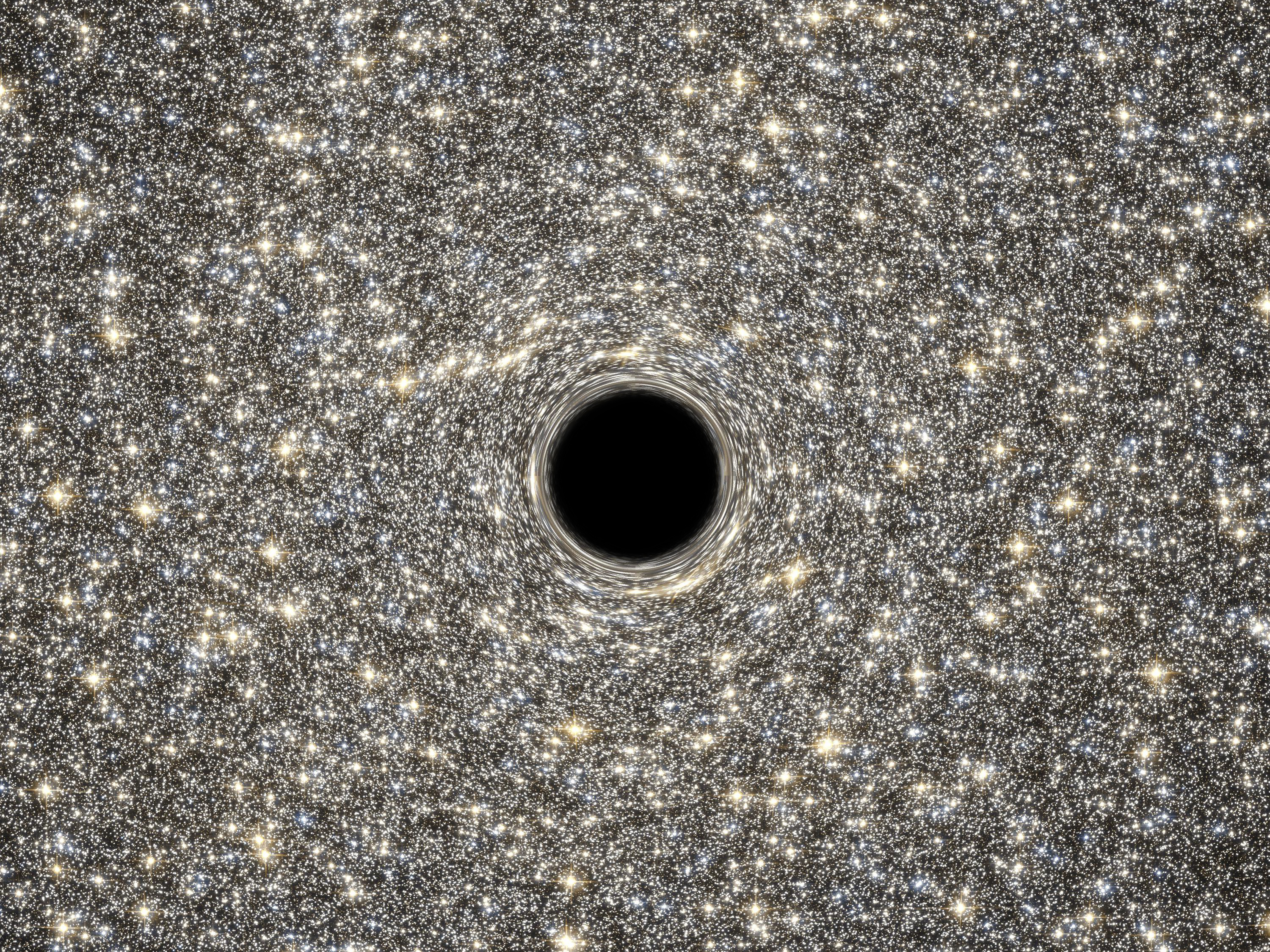 Astronomers using data from NASA’s Hubble Space Telescope and ground observation have found an unlikely object in an improbable place — a monster black hole lurking inside one of the tiniest galaxies ever known.

The black hole is five times the mass of the one at the center of our Milky Way galaxy. It is inside one of the densest galaxies known to date — the M60-UCD1 dwarf galaxy that crams 140 million stars within a diameter of about 300 light-years, which is only 1/500th of our galaxy’s diameter. If you lived inside this dwarf galaxy, the night sky would dazzle with at least 1 million stars visible to the naked eye. Our nighttime sky as seen from Earth’s surface shows 4,000 stars.

The finding implies there are many other compact galaxies in the universe that contain supermassive black holes. The observation also suggests dwarf galaxies may actually be the stripped remnants of larger galaxies that were torn apart during collisions with other galaxies rather than small islands of stars born in isolation.

“We don’t know of any other way you could make a black hole so big in an object this small,” said University of Utah astronomer Anil Seth, lead author of an international study of the dwarf galaxy published in Thursday’s issue of the journal Nature.

Seth’s team of astronomers used the Hubble Space Telescope and the Gemini North 8-meter optical and infrared telescope on Hawaii’s Mauna Kea to observe M60-UCD1 and measure the black hole’s mass. The sharp Hubble images provide information about the galaxy’s diameter and stellar density. Gemini measures the stellar motions as affected by the black hole’s pull. These data are used to calculate the mass of the black hole.

Black holes are gravitationally collapsed, ultra-compact objects that have a gravitational pull so strong that even light cannot escape. Supermassive black holes — those with the mass of at least one million stars like our sun — are thought to be at the centers of many galaxies.

The black hole at the center of our Milky Way galaxy has the mass of four million suns. As heavy as that is, it is less than 0.01 percent of the Milky Way’s total mass. By comparison, the supermassive black hole at the center of M60-UCD1, which has the mass of 21 million suns, is a stunning 15 percent of the small galaxy’s total mass.

“That is pretty amazing, given that the Milky Way is 500 times larger and more than 1,000 times heavier than the dwarf galaxy M60-UCD1,” Seth said. One explanation is that M60-UCD1 was once a large galaxy containing 10 billion stars, but then it passed very close to the center of an even larger galaxy, M60, and in that process all the stars and dark matter in the outer part of the galaxy were torn away and became part of M60.

The team believes that M60-UCD1 may eventually be pulled to fully merge with M60, which has its own monster black hole that weighs a whopping 4.5 billion solar masses, or more than 1,000 times bigger than the black hole in our galaxy. When that happens, the black holes in both galaxies also likely will merge. Both galaxies are 50 million light-years away.

The Hubble Space Telescope is a project of international cooperation between NASA and the European Space Agency. NASA’s Goddard Space Flight Center in Greenbelt, Maryland, manages the telescope. The Space Telescope Science Institute (STScI) in Baltimore conducts Hubble science operations. STScI is operated for NASA by the Association of Universities for Research in Astronomy, Inc., in Washington.

A Mountainous Coastal Landscape with a Ship Beached in a Storm, by Aernout Smit

Watching with Mother by Adrian McGarry

View of the Kremlin by Johanne Gottlieb Lohrer, 1813

Cornelia, Mother of the Gracchi, Pointing to Her Children as Her Treasures, by Angelica Kauffman, 1785

The Child Handel, Discovered by His Parents, by Margaret Isabel Dicksee, 1893

Flower Clouds by Odilon Redon, circa 1903